SALISBURY, Md. — The Light of Literacy Awards is coming to the Wicomico Civic Center for it’s 8th year.

47 ABC’s Erica Murphy was joined by Sam Gibson to learn about the event which will take place at the Wicomico Youth and Civic Center on April 7th from 8-10 AM.

The  8th annual Light of Literacy event, which will be narrated by 47 ABC’s Taylor Lumpkin, highlights those who promote and assist with literacy in their community.

Gibson tells us that the main focus is highlighting the people who focus on literacy from all aspects.

He says this year’s focus for the special category is arts literacy, which includes: performing arts, painting, visual arts, dancing and more.

Gibson also says that the keynote speaker is Eastern Shore native, Daniel Bowen from Symphony21, whom they’re excited to have.

Money raised from the event will go towards services that are provided for free by the library.

Nomination categories include: student, educator, adult, organizational and higher education.  Nominations will be accepted until February 21st at 5 PM.

Tickets are on sale now, to register for the event or submit a nomination, you can go to www.lightofliteracy.org. 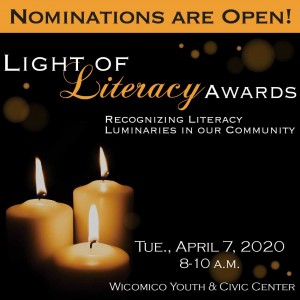