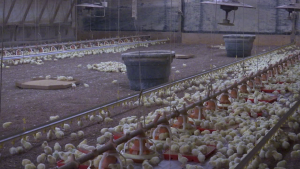 DELMARVA – Local poultry farmers say this past year was pretty rough for them and they’re attributing that to three main things: longer layouts between flocks, an increase in costs to run growing houses and more regulations.

“You’ve got a major problem with the whole industry and the survival of the industry,” says Virgil Shockley, a Worcester County farmer.

Delmarva Poultry Industry (DPI) released its annual report on Wednesday showing slight growth in chicken production between 2018 and 2019. But there’s another not so positive pattern that stands out. “But we also kind of zooming out can see that the chicken industry on Delmarva is growing at a slower rate than the U.S. chicken industry more broadly. About one third as fast,”
says James Fisher, the communications manager for DPI.

Shockley believes three things are to blame. First, the amount of time between old and new flocks coming in has increased because of industry standards and demand, meaning fewer opportunities to make money. “What’s happened out here in the last two years is basically to the growers we are taking a 25 percent cut because we are not getting the flocks.”

Second, Shockley says the price of things like electricity and insurance are eating away at profits. “You have so much cost involved in what you are producing that it’s that cost that you have that’s killing you.”

Third, Delmarva farmers face a lot of environmental regulations because of where they’re located. “Farmers, chicken companies and allied businesses all do a lot to protect the Chesapeake Bay and protect water quality. It’s just a fact of life that chicken producers in other regions don’t have to grapple with,” says Fisher.

So poultry farmers say this coming year is still uncertain because costs are continuing to rise and there aren’t any new markets coming into the picture right now.

Farmers add that the trade deal between the United States and China has impacted the poultry industry as well. That deal was supposed to be implemented by February 15th but the coronavirus has affected that timeline.