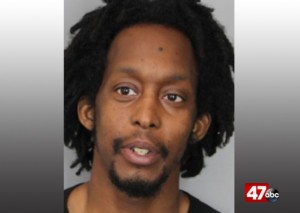 Harbeson, Del.- Delaware State Police arrested 30-year-old, Andree C. Mansfield, of Milford, after he led them on a chase, while in a stolen motor vehicle Saturday morning.

Mansfield eventually turned into a Royal Farm’s in Harbeson and he parked the car.

Police said he refused to get out of the car, threatening that he had a gun.

Mansfield was taken into custody.

Police found out that the car he was driving had been reported stolen to the Bridgeville Police Dept. They also learned that he has active warrants out for a domestic related incident.

When police searched the car, they found a kitchen knife with an approximately five inch blade.

Mansfield was charged with reckless driving, criminal mischief, failure to stop at a red light, harassment, breach of release, and more.

Mansfield was arraigned before the Justice of the Peace Court and committed to the Sussex Correctional Institution on $10,500 cash only bond.

Free tire disposal event to be held in Wicomico Co.