Fatal crash in Milford, one dead 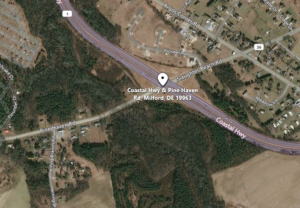 Police say 72-year-old Virgil Stewart, from Harrington, DE,  was driving a 2009 Mercury Marquis and traveling eastbound on Pine Have Rd. and stopped at a stop sign at the intersection of Coastal Highway.

A 30- year-old man, from Georgetown, DE,  driving a 1998 Dodge Ram pickup truck, was driving southbound on Coastal Highway and was approaching the intersection on Pine Haven Rd. where the Stewart was stopped.

The driver of the pickup was unable to avoid the other car, causing the front of the truck to hit the left side of Stewart.

Police said Stewart was pronounced dead at the scene.

A passenger in Stewart’s car, a male from Sioux Falls, SD,  was transported to the Bayhealth Sussex Campus for critical injuries.

The driver of the truck and his passenger did not sustain injuries.

The area of the crash was closed while the scene was investigated and cleared.