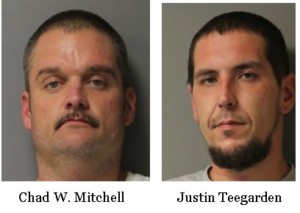 MILLSBORO, Del. – In Delaware, two men are facing a slew of charges after police say they stole landscaping equipment throughout the state.

Officers say throughout September and October, Mitchell and Teegarden stole lawn care and landscaping equipment at four different locations, three in Millsboro and one in Georgetown.

Both men are now facing charges that include felony theft, criminal trespass, and more.