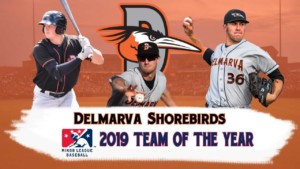 SALISBURY, Md- After one of the most successful seasons in franchise history, the Delmarva Shorebirds have another accolade to add to the list, MiLB Team of the Year.

The Shorebirds open their silver anniversary season at home when the Asheville Tourists come to Arthur W. Perdue Stadium on Thursday, April 9, 2020.

An inflation gauge closely tracked by the Federal Reserve was a high 6.3% in May, unchanged from April

GMD: One on one with NY Times best-selling author, introduces sequel in 'Realm Breaker' series