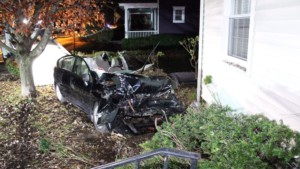 SALISBURY, Md. – Police say a 19-year-old from Salisbury was killed after a car crashed into a home overnight.

Officials say the accident happened around 1 a.m. in the 400 block of W. College Avenue, near Salisbury University and Camden Avenue. Investigators have not said what caused the accident but a 19-year-old passenger died from his injuries.

No one was inside the house at the time and the damage to the house appears to be non-structural. Salisbury Police say impairment by alcohol or drugs have not been identified at this time.

No charges have been filed related to the crash and Salisbury Police will continue to work with the Sheriffs Office Crash Team to reconstruct this scene and determine an exact cause.

Details are limited at this time but police are still investigating this accident. This article will be updated as more information becomes available.