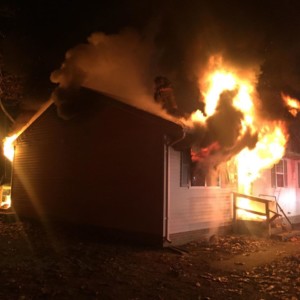 A post from the Salisbury Fire Department’s Facebook page says there were two people and a pet inside the home. Officials say they escaped the fire safely after they were alerted by a smoke detector.

The photo, provided by the Salisbury Fire Department, shows flames coming out of the door and windows of the home around by the time crews from Delmar and Salisbury arrived on the scene, around 4 AM.

Firefighters say the cause of the fire was determined to be unattended cooking.

We will continue to give updates as more information becomes available.