Driving without headlights on lead to discovery of crack cocaine 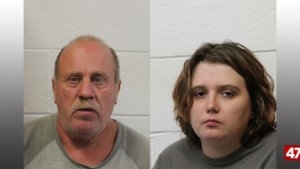 PARSONSBURG, Md. – On Monday, A Wicomico county deputy stopped a car after the headlights were off in a mandatory headlight zone along Route 50.

During the stop, police identified the driver as 57-year-old Jeffery Stuart of Pittsville and his passenger as 30-year-old Brittany Starns of Salisbury. The Wicomico Drug K-9 team scanned the car for the presence of illegal drugs, leading to the discovery of crack cocaine. During the search of the occupants, police say Starns hid a smoking device in her underwear.

Stuart and Starns were arrested and charged with Possession of Crack Cocaine. Starns was later released on personal recognizance, while Stuart was released on a $20,000 unsecured bond.