I know a lot of people are ready for the cooler temperatures, but this September felt a lot more like summer than fall!

The average temperature for September in Salisbury was 72.1°. This is including both high and low temperatures for the month. That was 3.9° above normal. The average high temperature was 82.9° and the average low was 61.3°. This makes September 2019 the 14th warmest on record.

As far as precipitation, we were well below average. Salisbury only received 1.35” of rain this month. That’s 2.63” below normal, and that makes this September the 14th driest on record. 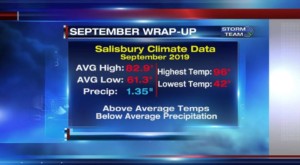 Looking ahead for the month of October, the Climate Prediction Center is predicting generally above average temperatures for us with average precipitation. Over the next week, our 7 day forecast shows anything from highs in the 90s to highs in the 60s, so it’s safe to say we can expect a little bit of everything!