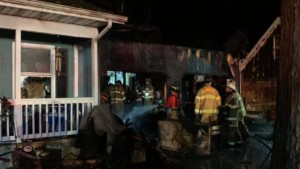 Investigators determined a malfunction of electrical wiring inside the garage caused the blaze. Officials say smoke alarms inside the home alerted the residents to the fire.

Heavy fire damage is estimated at $75,000 including exposure damage to the neighbor’s house. Luckily, there were no reported injuries.