Delmarva’s fourth heat wave has ended, but some lucked out from experiencing it. 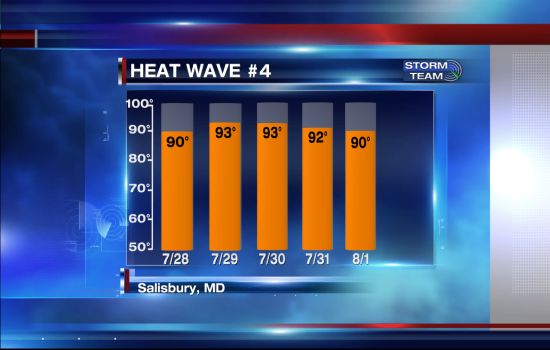 Easton had the longest stretch during this heat wave at 8 days, starting on Thursday, July 25 and ending on Thursday, August 1st. They also had the hottest temperature recorded out of all the stations during this heat wave at 97°, on Tuesday, July 30th. The 2nd longest stretch occurred in Salisbury, lasting at 5 days, from Sunday, July 28th to Thursday, August 1st. Salisbury’s hottest temperature during the heat wave were a 2 straight days of 93°, recorded on Monday, July 29th & Tuesday, July 30th. Georgetown was slightly shorter at 4 days, starting on Sunday, the 28th and concluding on Wednesday, the 31st. Georgetown’s thermometer however, maxed out higher than Salisbury at 96°, on Tuesday, July 30th.

The best news of this past heat wave, was that the humidity played a small role. Dew points at the beginning of this heat wave were pleasant in the low 60s, but increasing gradually into the upper 60s by Wednesday, as a cold front neared the peninsula. Due to the lower humidity, heat indices were tolerable in the 90s, compared to the triple digits in the 3rd heat wave. Southern Delmarva was also cooler than northern Delmarva during this heat wave, to the point that Ocean City & Wallops recorded only 1 day in the 90s and Melfa barely clinched the classification of 3 days, from the 29th to the 31st. 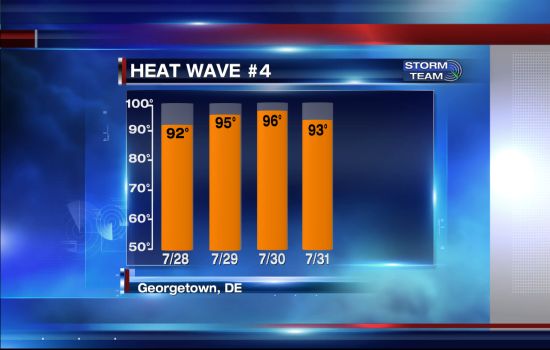 The heat wave ended for most on the 31st, with a cold front bringing some severe weather. Salisbury and Easton had other plans, and went the extra mile to continue the streak into the 1st day of August before a 2nd round of severe storms passed through the peninsula, from the now stationary front. The stalled front  provided considerable cloudiness and showers on August 2nd, bringing everyone highs down into the low 80s, thus ending it for Salisbury & Easton.

Luckily the next 7 days, chances of entering the 5th heat wave of 2019 are 50/50. A blended mix of clouds and sunshine; with the chance of isolated to scattered storms almost everyday, will keep most of our highs in the mid to upper 80s. However, a few 90s are possible by midweek, so stay tuned.