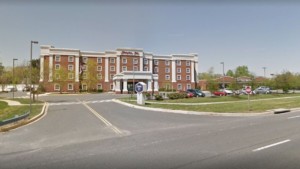 EASTON, Md. – Police say they’re looking for the person who tried to rob the Hampton Inn in Easton, just after midnight on Sunday.

According to officials, the incident happened at the Hampton Inn at 8058 Ocean Gateway. Police say a man walked through the first door to the front desk but could not get past the second door because it was locked. That’s when the man reportedly showed a handgun and a bag, then yelled to the front desk clerk “let me in”. The hotel employee did not let the man in and the suspect reportedly ran away toward WaWa at the corner of Ocean Gateway and Dover Road.

The suspect is described as a man of “small stature” wearing a blue jean jacket, gloves and a dark mask.

Anyone with information about this incident is asked to call the Easton Police Department at 410-822-1111.