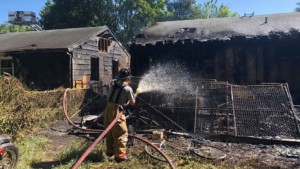 Crews responded to a fire around 9:30 a.m. on Spruance Road in Dover. When firefighters arrived on scene, one house was engulfed in flames and the house next to it had smoke coming from it.

It took fire crews about 30 minutes to put out the flames. Officials say one house was gutted and the house beside it was saved. Luckily, no one was injured in the fire.

Officials say about 60 snakes were in the house that was gutted. They did not survive.