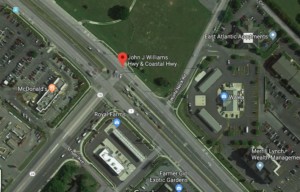 REHOBOTH BEACH, Del. — The Delaware State Police are investigating a serious crash involving a bicyclist that took place on Coastal Highway, south of John J. Williams Highway, at the entrance to the Royal Farms convenience store.

Police say the crash happened around 8:15 p.m., Sunday, August 11, 2019.  A truck being driven by a middle aged man of Rehoboth Beach hit a 24-year-old woman from Poland as she rode her bike along the southbound bike lane on Coastal highway.

As a result, the front of the vehicle hit the left side of the bicycle and caused it to overturn onto its right side. The woman riding the bike was completely thrown off.

Authorities say the bicyclist was taken by ambulance to a local hospital but was later airlifted to the Christiana Hospital where she is being treated for a head injury. It is being reported that she was not wearing a helmet at the time of the crash. She is currently living with a host family in the Rehoboth beach area, no word yet on if her family has been notified.

The victim’s bicycle had a front headlight and rear taillight but, no one knows it they were activated at the time of the crash. The bicycle operator is a 24-year-old female from Poland and she is currently living in the Rehoboth Beach area with a host family.

The truck driver was properly restrained and did not report any injuries as a result of the collision.

State Police say impairment does not appear to be a factor on behalf of either the driver or bicyclist. The crash is still under investigation.

UK prime minister fires his party chairman, accused of settling settled an unpaid tax bill while he was Treasury chief