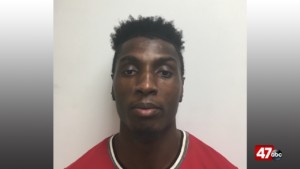 SALISBURY, Md. – Police have released the name and picture of the suspect. The suspect is identified as 27 year old Jamesly Massenat of Salisbury.  Police say he went into the PNC bank in north Salisbury shortly after nine this morning and displayed a note while demanding money from bank employees. We’re told Massenat was given an undisclosed amount of money before fleeing the scene. Luckily Police were able to react quickly and within a matter of a few hours tracked Massenat down at the Food Lion on Snow Hill Road where he was arrested.

As of right now the investigation into that robbery is ongoing. Anyone with any information should call Crime Solvers of the Lower Eastern Shore at (410) 548-1776, or the Salisbury Police Department Criminal Investigation Division at (410) 548-3165.

Details are limited at this time. Officials have confirmed that the incident happened at around 9:15 a.m., and that no one was injured.

We’re told that the suspect is still at large, but that there is no threat to the public at this time.

We will have more details as they become available.