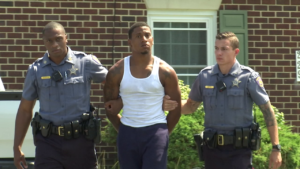 CRISFIELD, Md. – The Somerset County Sheriff arrested the man who allegedly shot and killed someone, Friday, at the Somers Cove Apartments.

47 ABC was at the Somers Cove complex just after 11 a.m. on Saturday when Bobby Lee Tenner Jr. was taken into custody. Tenner was taken to the Crisfield Police Department for questioning.

The arrest stems from a shooting that police responded to on Friday night. Officials say they found a man, later identified as Darryl Merrill Jr., lying in the front yard with a gunshot wound to his forehead. The 26-year-old was pronounced dead at the scene by paramedics.

Police learned that eyewitnesses saw Merrill get in an argument with a person identified as Tenner. During the argument, 27-year-old Tenner allegedly took out a handgun and shot Merrill. Police say Tenner ran away after the shooting.

Anyone with information about this case is asked to contact the Crisfield Police Department at 410-968-1323.