Most of Delmarva has officially recorded two heat waves so far this summer, and with a similar pattern going forward, more heat waves are likely.

The first heat wave (three or more consecutive days of 90°+ temperatures) occurred at the end of June, which lasted for five days. The late June heat wave began on June 26th and continued through June 30th. Temperatures were at or above 90° before falling into the 80s on July 1st, officially breaking the heat wave. Wallops Island had an even longer first heat wave, which lasted for six days. It started on June 25th and ended on June 30th. Ocean City even made it into the 90s at the end of June, but for only two consecutive days. 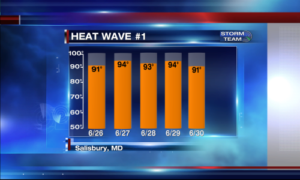 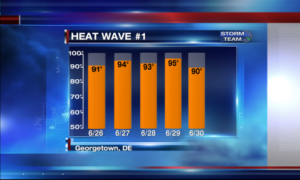 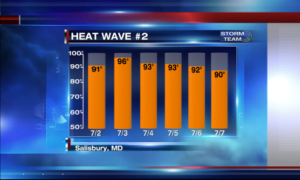 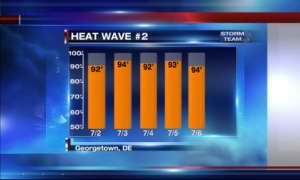 Although these two back to back heat waves made for some uncomfortable summer days, no record highs were broken. And this hot pattern doesn’t look like it’s going to change much as we go through July, so more heat waves are expected. The next one will likely start within a few days. Temperatures look to climb back into the 90s this weekend and next week. By then, it will definitely be the dog days of summer. Stay cool, Delmarva!