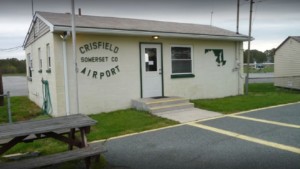 CRISFIELD, Md. – The Maryland State Police is investigating a plane crash that injured one person and left one dog dead, early Saturday morning.

Police say Lori Dennis called the Princess Anne State Police Barrack around 7:25 a.m. to report that her husband crashed a plane at the Crisfield Regional Airport.

Officials responded to Dennis Shaw’s house on Marion Road where they learned he crashed a plane around 4 a.m. and then called his wife. Dennis Shaw reportedly lives in New York and was going to fly there when the plane had some mechanical problems.

Dennis Shaw was able to walk away from the crash site and get to his home. EMS brought Dennis Shaw to PRMC with minor injuries.

Troopers also say they searched the crash site for Shaw’s two dogs that were also on the plane. One was found inside the plane alive but the other unfortunately died.

The crash location was approximately 600 yards off the runway. The following agencies have been contacted: Maryland Department of Environment, NTSB and MEMA. The scene is secure and the investigation still on going.

German police: Several people injured in incident of unspecified nature in the city of Heidelberg