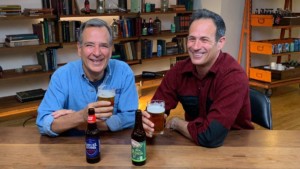 MILTON, Del. – Delaware based brewery Dogfish Head announced on Thursday that it is merging with Boston Beer Company, the makers of Samuel Adams.

Samuel Adams’ official Twitter shared a picture saying, “We’re thrilled to announce that we’re joining forces with @dogfishbeer, bringing together 2 pioneering and passionate industry leaders in America. This partnership will create the most dynamic American-owned platform for craft beer & beyond!”

The Boston based company shared a picture of Jim Koch and Sam Calagione enjoying a glass of beer together as part of the announcement.

In an online letter to BeerAdvocate, Koch and Calagione say, “Between us, we have more than half a century of brewing experience under our belts. We’ve seen dramatic transformations in our industry, especially in the last decade. There’s been quite a bit of consolidation and an attack on transparency as the global mega brewers started buying regional brewers and marketing them as independent and local.”

The value of the deal is estimated at $300 million.