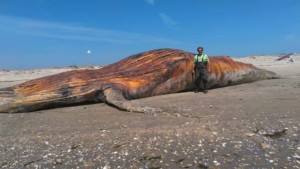 Matthew Klepeisz, with the Virginia Beach based aquarium, tells 47 ABC that a team responded to the report late last week. However, the whale was in a remote area on Parramore Island and researchers were not able to preform a necropsy.

R & C Seafood shared a picture of the whale on Facebook saying, “Another whale washed up on the beach out of Oyster.”

Klepeisz says it’s not clear what killed the whale. He could not confirm how long it had been dead or what gender it is.

Unfortunately, he says there’s not a lot that researchers can do moving forward.

Nevada officials released a man, now wanted in Oregon, the same day he came to a prison to serve a kidnapping sentence