Maryland on track to become first state to ban styrofoam, bill headed to the Governor 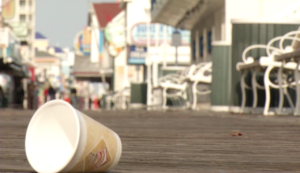 ANNAPOLIS, Md. – It looks like Maryland is on it’s way to becoming the first state in the nation to ban foam containers for food and drinks to fight pollution. On Wednesday, the Maryland General Assembly passed the legislation to ban these containers which officials say take up to 40% of the space in our landfills. They add that it’s also a major source of litter in Maryland’s communities and waterways. If signed by Governor Larry Hogan the law would ban foam cups, plates, and containers for packaging food. And the retail sale of these products, starting in July of 2020. Officials also tell us that this is the third year the bill came before the Maryland General Assembly.