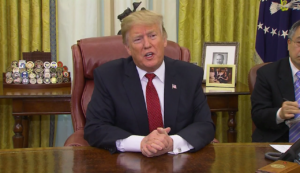 SALISBURY, Md. –  In just a couple of hours, President Donald Trump will deliver his State of the Union address. It will be his second, and maybe his most important as he looks to bring together a house controlled by democrats and a senate controlled by Republicans while also pushing for border wall funding.
Around the country and here at home there are a lot of questions about what this speech will do, if anything. There’s going to be a lot to look for during President Donald Trump’s speech tonight. The main thing includes a look at the President’s immigration policy where he’s expected to speak on border security and reiterate his demand for billions of dollars in funding for a wall. He’s also expected to address a number of foreign policy issues including his push to withdraw troops from Syria and Afghanistan. An excerpt from President Trump’s speech show’s that he’s also going to push for bipartisanship to get both parties on the same page to pass important legislation. But, local political experts say the likelihood of that happening is slim to none.

“He may speak in a bipartisan fashion—but it’s less likely that the practice will follow that. Because the divisions are deep now. On the big marquee issues, it’s doubtful I think moving forward,” said Salisbury University politics professor Dr. Mike O’Loughlin.

O’Loughlin adds that although he doesn’t believe Trump’s push for bipartisanship will be effective he does believe both parties will find some common ground on certain issues. Including the push for Trump’s infrastructure plan as well as obtaining more control over drug prices.

A 51-year-old man is charged with killing 2 Muslim men in Albuquerque, suspected in 2 other slayings