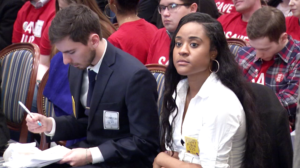 ANNAPOLIS, Md. – Will Maryland raise minimum wage from a little over $10 to $15 by 2023? That’s what House Bill 166 is all about. It’s a bill that drew in nearly 200 workers, business owners, and other stakeholders from across the state to Annapolis Friday to testify.

People letting their voices be heard Friday. Passionate testimonies from people both for and against raising the minimum wage.

“80 percent of residents are living pay check to pay check and they’re just one emergency away from poverty,” exclaimed one woman testifying.

Restaurant server Janay Baker is one of many workers living on minimum wage trying to make ends meet. A worker who made her way to Annapolis to fight for $15.

“You can work hard and long and still walk away with little to nothing. So yeah being a server is a lot of footwork, a lot of people and customers and it takes a lot out of you and you want to go home and feel like its worth it,” explains Baker.

She among others, believe House Bill 166 would do just that, but the business community sees it differently.

“We think it would just potentially ruin the industry certainly for my business it would be a huge challenge. Looking at over the next roughly eight years about a $10.8 million increase in expense and that really stresses us and potentially put us out of business,” explains Bryce Phillips, of Phillips Seafood.

Something Eastern Shore Delegate Chris Adams, a member of the House Economic Matters committee who’s hearing these testimonies, agrees with.

“The best workforce development is somebody’s first job and so the minimum wage going to $15 an hour is absolutely going to affect us on the eastern shore.”

Adams and others believe that even a gradual increase could trickle down affecting consumers.

“If you like going out for a $10 lunch get used to a $17 lunch and I think a lot of people would just bring their lunch from home and stop patronizing restaurants in the future because of that,” explains Phillips.

But the Fight for $15 believes it’s a moral obligation to do so.