White Christmas On Delmarva? Not Likely This Year.

Are you dreaming of a white Christmas? Unfortunately, it’s not looking good for Delmarva this year. Our current forecast is partly sunny with temperatures in the upper 40s.

The official definition of a white Christmas is at least one inch of snow on the ground at 7 AM. The last time this happened in Salisbury was 1989! The most snow Salisbury ever had on the ground Christmas Day was 6” in 1966 and 1935. 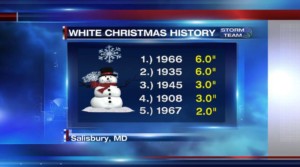 Falling snow on Christmas Day is a different story, and that happened in 2010. Snow arrived later in the day with 1” of snow observed in Salisbury by midnight. The majority of snow fell the day after Christmas, with a total of 10.4” of snow for the entire storm!

Statistically, there is a less than 10% chance of having a white Christmas on Delmarva for any given year. This makes sense considering the average high on Christmas is 46 degrees. 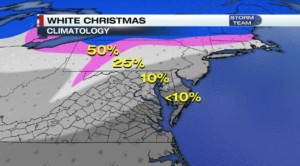 Have a wonderful holiday season, Delmarva!