An antibiotic resistant strain of salmonella is at the center of this outbreak. 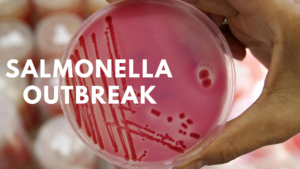 Almost 100 people have been infected with a strain of multidrug-resistant salmonella, the US Centers for Disease Control and Prevention said Wednesday.

Officials say the 92 patients across 29 states got sick, after coming into contact with a variety of raw chicken products.

Twenty-one of the sick patients have been hospitalized, but fortunately no deaths have been reported.

Officials say lab tests do not show which raw chicken product caused the outbreak and no single common supplier has been named. The strain has shown up in samples from a variety of raw chicken products including pet food, chicken pieces, ground pieces and whole chickens. The bacteria have also been found in live chickens.

The US Department of Agriculture’s Food Safety and Inspection Service is monitoring the outbreak, and the CDC’s investigation is ongoing. This particular salmonella strain is resistant to multiple antibiotics, the most common form of treatment.

The CDC says the outbreak started in January, and more people have tested positive for this strain through September.