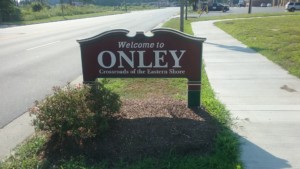 Onley residents will have to choose between 11 Town Council candidates on November 6.

The Mayoral seat is also on the ballot. Two candidates are vying for the spot: W. R. “Bill” Ferguson and Matt Hart. The seat is currently held by Mayor Jack Pierson.

Polls open at 6AM and close at 7PM.