CAMBRIDGE, Md. – A family in Cambridge is asking for justice after their son was stabbed and killed back in October. However, the family says their son’s killer is still on the loose and they can’t rest until he’s found.

Roderick Russ Jr. was just 26 years old when he was stabbed and killed after an alleged altercation. His family tells us, Roderick died doing what he always does, trying to help a friend. Roderick’s sister, Sha’Quanna Manokey says, “His heart got the best of him, he stepped in for someone who he cared about, and he paid for it with his life.”

According to his family, Roderick was deeply involved with the youth in Cambridge and the community was heart broken when they learned of his death. Cambridge police say they are currently searching for suspect, Ryshon Kelly who is wanted for the stabbing of Roderick. However, according to Roderick’s family, that’s not enough. “I don’t want my son to be forgotten, it’s been five months and there’s no excuse why this person is still out there,” says his mother, Jeanna Elliot.

Roderick’s brother, Joe Manokey shared his frustrations with the state’s attorney office and how they’ve handled the case, he says “they don’t have a soul.” After a few shared words in a meeting with the state’s attorney working on their case, they say they’re not quite seeing eye to eye. Roderick’s family says, through all of the case work and trying to find the suspect, they have yet to mourn for their son and brother. 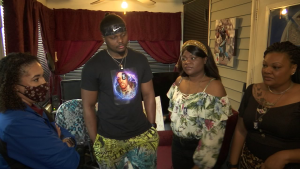 We reached out to the state’s attorney’s office who says, “The state’s attorney office has worked with police in this investigation since the night the homicide occurred. The deputy state attorney assigned to the case has continued to work with law enforcement and assist in their efforts to locate the suspect.” However, the attorney who is personally working on the case is unavailable for comment, as the case is still pending.

Roderick’s mother and siblings say, they simply want his case to be treated like anybody else’s because they don’t want any other family to go through what they’ve been through.

There will be a tribute held for Roderick some time in June.

The state’s attorney’s office also says, they can’t discuss anymore specifics of the case because it is still pending. If anyone has information on the case or the whereabouts of the suspect, you’re asked to call (410)-228-3611.