DOVER, Del. – Dover police are still trying to find answers after a 21-year-old was killed during a hit and run Friday night. Three days have passed since then and there’s still plenty of debris left behind and many unanswered questions.

M/Cpl. Mark Hoffman of Dover PD says, “No arrests have been made, we have been unable to locate the vehicle. We have received some tips from the public but we continue to look for more information from the public or anybody who witnessed the scene.”

But that hasn’t been easy since many of the businesses along Forrest Road were closed just before 9 p.m. Friday night, except for Betsy Ross Pizza.

“There was a very large boom we heard, the few customers that were in, as soon as we heard the boom we could see on the corner of salvation army a car that look like its top had been badly damaged,” explains longtime owner Kathy Theodorakos.

“I hope they find who did this they need to be punished. I mean that’s very, very sad how he could make such an impact is what got me.”

But that’s been hard to do, so Dover police want the public to take a good hard look at this surveillance footage.. 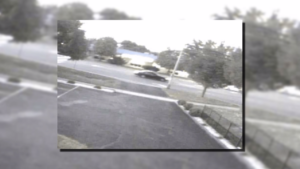 “It appears that the operator of that dark sedan turned off their headlights immediately after the collision in an attempt to conceal their vehicle when they fled,” explains Hoffman.

That’s why Dover police are asking anyone with any information about Friday’s crash to give them a call, even if it’s something as little as a bumper sticker.

If you do have any details about the crash contact the Dover Police Department at (302)736-7111. A cash reward of up to $1,000 is also possible for information leading to an arrest through Delaware Crime Stoppers.