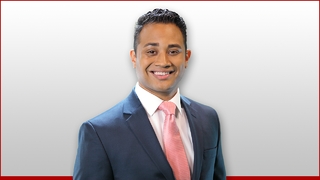 How’s it going Delmarva? I’m Julian Sadur, your News Reporter!
As a native Marylander I visited the Eastern Shore often for summer vacations during my childhood, so I’m very excited to be part of the 47 ABC News Team.
I grew up right outside of the Washington, D.C., where I played football and baseball while attending Richard Montgomery High School. After trying my hand at college baseball for two years at Montgomery College, I decided to focus my attention full-time on school and transferred to Towson University. Go Tigers! At Towson, I majored in journalism and became a proud member of Phi Sigma Kappa fraternity.
After graduating Towson I spent the summer interning for National Public Radio in Baltimore at WYPR 88.1 FM. From there I joined the news team at the Montgomery County Sentinel in Rockville, Md. where I covered some of the area’s biggest news, including the fatal January 2015 Metro incident and the Baltimore Riots. Even as young boy, I knew I had a future in broadcasting. From doing the morning announcements as a fifth grader at Lakewood Elementary, to performing in Mr. RM during my senior year – I knew speaking in front of a crowd was something I loved. In my spare time you can catch me shooting hoops, playing golf and sports in general, hanging out with friends, cooking, rooting for my Washington sports teams and just overall having a good time. I’m very excited to explore Delmarva and get to know the area I’m covering! I always have a smile on my face and I love a good conversation so if you see me, don’t be afraid to come say “Hey!”
If you ever have a story idea or any feedback feel free to email me at any time! You can also see what I’m up to by following me on Twitter @JulianSadur and on Facebook!

What Black History Month Means To Us

"When You See Us"

Biden: A President in the Making, Part Two

Sen. Carper 'soon to be' the chairman of the committee on Environment and Public Works

Health experts say mental health will be a priority in 2021

Latest round of stimulus relief falls short some say

Noise For Toys looks to use music to help others

Which COVID-19 test should you take?

Over A Decade Waiting For Justice: The Cold Case of Arlene Byrd and Antonio Smith

BTS: Fighting For Acceptance Part One