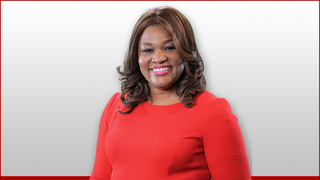 Erica Murphy joined the 47 ABC news team in July of 2017.
She joined the staff as a weekend anchor and day-side reporter, but was recently promoted to morning anchor for the station’s flagship morning show, Good Morning Delmarva.

Erica is originally from southern Ontario but moved to Detroit when she was just 13 years old.
Murphy got her start in broadcast news in 2006 as the news anchor for Weekend Edition on Detroit’s NPR affiliate station.
She moved on to be the executive producer of “Inside Detroit with Mildred Gaddis” on WCHB in Detroit in 2007.

Erica has worked for several news stations in Detroit and around the country, including WWJ Newsradio 950, WDET, WJR Newstalk 760 and WJBK Fox 2 News. She’s also done internships at the Fox News Channel in New York and the E! & Style Network in Los Angeles.

It’s always been her dream to transition to TV news and she’s so grateful to have that chance right here at 47 ABC. Erica received the bulk of her education from the Detroit Public School system and Wayne State University. She is a proud mom and devoted daughter.

In her free time, Erica enjoys ballroom dancing, telling “colorful” jokes and belting out a song  at karaoke spots around town.

If you have a news tip for Erica, please email her at: Erica_Murphy@wmdt.com

Boosting Your Immune System with Food and Supplements

The Brightside: The Town that Tricked the British

The Brightside: The Fresh Air fund